One Night in Vegas

“I only ever play Vegas one night at a time…it may not be the end of the world, but you certainly can see it from there.” – Robin Williams

You are in the middle of the desert.

Add palm trees, the Eiffel Tower, and an Egyptian Pyramid.

You have Las Vegas.

I just returned from my 4th trip to Vegas.

And I still can’t decide if I LOVE it or HATE it.

All crashing together in a 4 mile long street appropriately called “The Strip”.

The Vegas Strip is the only street in America where I would pay a cover charge to walk around.

A Quentin Tarantino movie is playing out on each block.

People from every walk of life collide in a neon lit 24/7 wave of chaos.

Scenes From “The Strip”

I was watching Bellagio’s fountain show.

I imagined being in the cast of Ocean’s 11.  Two large men standing next to me started to argue.

Then, right on cue, dozens of people with “Trust Jesus!” signs marched on the scene screaming “Repent!” to everyone in the crowd.

This all took place across the street from the Eiffel Tower, which was backdropped by a 7 story image of Britney Spears looking down on us.

What possibly could go wrong?

Later that night, I was transported back to 8th grade.  At least for a moment.

Doctor J walked into the restaurant where I was having dinner.  He sat down right next to us.  How cool is that for a boy from Philly?

I waited in vain to find the right moment to ask for a photo, but no dice.

The Doctor was busy operating at the dinner table.  We left him alone.

Nothing about Vegas is AVERAGE.

Love it or hate it – a night in Vegas is REMARKABLE. 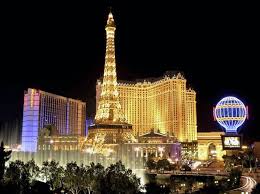